While perusing some of the blogs I follow I found the below at www.lilithsaintcrow.com/journal She is one of my favorite authors and describes so well the feeling I have about books and ebooks that I had to steal..I mean copy what she wrote about the subject.

"I have very mixed feelings about ebooks. Part of this is because I’m very in love with the sensuous experience of reading a physical book–the smell of the paper, the feel of the pages. Partly because used bookstores and libraries were my salvation before the Internet existed, they were my salvation when I was too poor for a high-speed connection or indeed any connection at all, and they still continue to be the places I patronize when looking for books, because I don’t want to spend the money on an e-reader and deal with the hassle of platform changes, technology burps, and the distributor deciding to take things off my private electronic device even after I’ve paid for them–I could go on and on."

Since you all know me, you all know I LOVE BOOKS. I dont' watch TV, I read. I don't clean house much, I read. My poor garden would be totally neglected if the Bobster didn't water it, I read. My sister gave me a Kindle at Christmas and she loves hers to the exclusion of paper books. I like the convenience of having a book anytime, any where but I am finding I enjoy the paper experience more. I didn't realize that I kind of thumb through the book a little ahead of where I am to see what happens next until I couldn't do it with the Kindle.

Do you read ebooks?
Posted by This Blonde's Life at 12:07 PM No comments: Links to this post

I am always on the search for good summer reading but this year it seems that there just isn't that much out there that I am interested in. So I decided to go for a "classic". To Kill A Mockingbird was never required reading in any of my high school or college (yes, I went to college) reading lists and I did not see the movie, so really, I don't know what I am in for. I do know Demi Moore named her kids after characters from the book but that is about it.
Did you read it? Did you like it?

The second "classic" I am going to read is Twilight. I don't have any desire to read it or see the movies but I feel like I am missing out on something by not knowing what happens. Seeing all the movie trailers though, I bet I can figure it out. I really loved Stephanie Meyer's book, The Host so I am giving Twilight a chance. I know my sister, 2 nieces, 2 sister-in-laws and nephew's girlfriend have all gone ga-ga over it. WISH ME LUCK! I may need it.

What is your favorite book and why?

This blogging stuff is more work then I thought! I wanted to post this recipe for the sis-in-law and was going to take a picture of the finished product but we ATE IT before I ever got around to taking pictures. Sign of a good cake.

Spray a rectangle cake pan with Pam (or whatever you like)

Smash the mandarin oranges ( I ran them through my blender for a few seconds) and mix them, juice and all with the cake mix and eggs.

Isn't this easy? It was very good too and even if you can't bake you can make this yummy cake.
Posted by This Blonde's Life at 9:24 AM No comments: Links to this post

I was just checking out one of the blogs I follow, www.thepioneerwoman.com and she posted a picture of the pile of junk she swept up from her kitchen floor after not sweeping for a week. She also listed what was actually in the pile and honestly, I FEEL GOOD! It was a mess! I wish I could figure out how to copy it here, I tried cut and paste, so you could see it. Just go to the link and look under Home and Garden. It will make you feel soooo good about your housekeeping abilities, or lack of them!!!
Posted by This Blonde's Life at 12:06 PM No comments: Links to this post

How my garden grows! 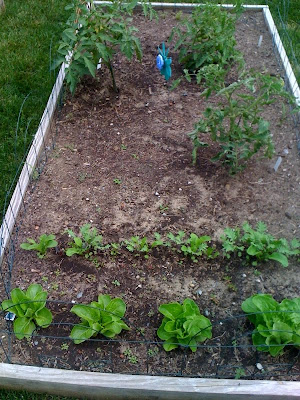 My garden is coming along nicely. This is lettuce and tomatoes. You can't see the little tiny carrot tops but they are at the top of the picture. 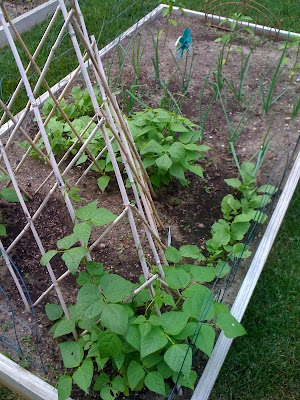 This is pole beans, radishes onions, green peppers and more little tiny carrots. I love this time of year. Every time it rains everything in my garden just gets bigger. As you can see it's not a large garden but we get enough veggies for the two of us and it's not too big as to be too much work.

My grandmother was raised on a farm in Wooster, Ohio and always had a large garden, mostly tomatoes. She grew cherry tomatoes for us kids and tons of strawberries. I have wonderful memories of the time I spent with her outside in the garden. I love the crisp smell of green things growing and wet dirt!

Posted by This Blonde's Life at 1:04 PM No comments: Links to this post

"Character can not be developed in ease and quiet. Only through experience of trial and suffering can the soul be strengthened, vision cleared, ambition inspired and success achieved." - Helen Keller

This is one of my favorite quotes. It also makes me think of my sister. Not that she is a Character... because we all know she is... It's because she has gone through a great deal this past year and yet each and every time she comes out strengthened. Stronger and able to face the next thing that comes at her. I love my sister. I love her kindness, her wit, her ability to talk to anyone, anywhere at anytime. I love that even though we live across the country from each other, I know she is right there being my sister.

She will probably never let me "Guest Blog" again after reading this so I just wanted to get my thoughts out there for everyone who has a sister... Love them! Don't let anything get in the way of your bond of being sisters.
Posted by This Blonde's Life at 8:39 AM No comments: Links to this post

Molly graduated last night. It was bittersweet to see my little girlfriend all grown up and on her way to adulthood. I will add more later...after I get over the sniffles...sniff..sniff...
Posted by This Blonde's Life at 8:49 AM 1 comment: Links to this post

I am on vacation! I will post more next week but the Bobster and I are going to Dallas Sunday to see Molly graduate from High School! I cried just picking out a card for her :D It will be in the 100's there, yep, ONE HUNDRED! I will be staying at my sister's with, the Bobster, my mom, my sister, her husband and her two teen age girls. Wish me luck!
Posted by This Blonde's Life at 11:45 AM No comments: Links to this post

I woke up at 4:00 am to a dog barking, howling and whining. I thought it was my neighbor's and tried to go back to sleep but it sounded like it was right outside my window. It was. There was a medium size black dog in my yard. My gate was closed so it must have climbed the fence. I can't figure out any other way it got in. When I turned on the back patio light the goofy dog ran up to my patio door and started whining and scratching to get in. The cats were sitting at the window having way too much fun watching the excitement and Gracie was barking at the poor critter.

I called the police and said "there is a dog in my yard howling and whining and it's not mine." Roseville's finest told me, "the dog catcher isn't in at 4:00 am". Well, really? I said, "THERE IS A DOG AT MY BACK DOOR TRYING TO GET IN AND IT"S 4:00 AM!!" I think I actually was talking in capitals at that point. The dispatch officer said, OK, we will send a car.

About 5 minutes later Roseville's finest showed up and walked to my gate. I went out to meet them and they were just standing there, looking at the poor pathetic dog, who at this point was trying to lick them to death through the fence. I told them I thought it might belong to someone who lived behind me and over a few houses. One of the guys says, we can go look and if not, we can just open the gate and LET HIM GO! I said, umm, I think you should take him with you! After much discussion between the 2 of them, honest to god, they opened the gate and were trying to TALK THE DOG INTO GOING WITH THEM! My tax dollars are paying for the Keystone Cops! The dog is running in circles and the cops are trying to get it! In the meantime Gracie the Wonder Dog is sitting at the front door trying to figure out what the heck is going on. This poor dog ran up on my porch and was trying to get in the house and Keystone 1 and 2 were out by the street calling the dog! What part of 4 AM didn't they get?

I went in the house, got one of Gracie's leashes, looped it around the dogs neck, who I had to grab at the front door trying to sneak in, and gave the silly thing to the silly cops!

No going to back sleep by that time.
Posted by This Blonde's Life at 7:03 AM 1 comment: Links to this post

I haven't been able to post this week because I am working on a big project that is due Friday. I leave for vacation Sunday, going to Dallas to see our Molly graduate from high school, and I have our work graduation party Friday night. I am trying to get some stuff together for Stefanie's garage sale (pray for no rain) and I had to get my nails done. For a person with no kids and a hubby who stays home and cleans the house I seem to be AWFUL busy.

What did everyone do for Memorial Day? On Friday we went to a bonfire at brother/sister-in-laws and roasted marshmallows. It was the perfect night for it. The only other thing we did was go see "Ironman" on Monday. Don't bother! Bob liked it but I felt it was a mish mash. One of the main characters was extremely annoying and in the middle of the movie it sort of changed direction. Did anyone else see it? What did you think?
Posted by This Blonde's Life at 7:06 AM No comments: Links to this post


Courage is fear holding on a minute longer - George Patton

This Blonde's Life
Hope you enjoy my ramblings.